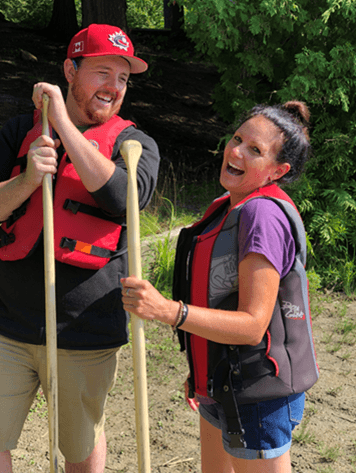 It’s been another remarkable Summer Camp season; full of so many indelible moments. Our heartfelt thanks to everyone that played a part in the 2018 season.

As we turn our attention to the 2019 season, we have some news from Wenonah.

Our Summer Camp Director, Geoff “Rudy” Williamson will be stepping down in the coming months.

I wanted to share a few thoughts today about Rudy’s remarkable 19 years at Wenonah including the past four seasons as Camp Director.

Rudy has done it all over 19 years at Wenonah. A camper, POLARIS, WCIT and staff member in many diverse roles with both Summer Camp and The Camp Wenonah Centre for Outdoor Education. And for the past four seasons, Rudy has been our Summer Camp Director.

When I think of Rudy, I think of an eager young camper full of energy and wide-eyed excitement. An engaged POLARIS and WCIT (when he was a member of one of our largest legacy groups ever). A constantly creative programmer. A member of such a remarkable family that’s given so much to Wenonah for so long. An empathetic listener. A staff member that played such a key role in so many Closing Campfires. An example. A mentor. Just a fine, fine man.

Mostly, I’ve been thinking of Rudy’s leadership these past four seasons. When I stepped into the new role of Executive Director after 18 years as Summer Camp Director, I knew we needed someone to lead us forward with passion, precision and a deep sense of what is most important about our experience at Wenonah. We found such a person in Rudy. He’s led us through a period of dramatic growth. The 2020 anniversary season. The purchase of the campground next door. A revamping of our entire Summer Camp program experience. Changes within our Camp culture that have made us more inclusive. And yet at the same time, with so much change and growth, he’s encouraged and nurtured all the elements that are so central to our experience at Camp.

As Rudy prepares for the next chapter in his life (with his marriage to his long-time partner Brittany on the horizon in 2019) we will continue to celebrate his many, many contributions to life at Wenonah.

Today, we thank Rudy for so many things. He’s shared himself so completely with Camp. Simply, he’s made us better.